The simplicity of the pressure seal design makes it attractive and eliminates the shortcomings of traditional pressure valve designs. A review of its components is necessary to understand how it works. 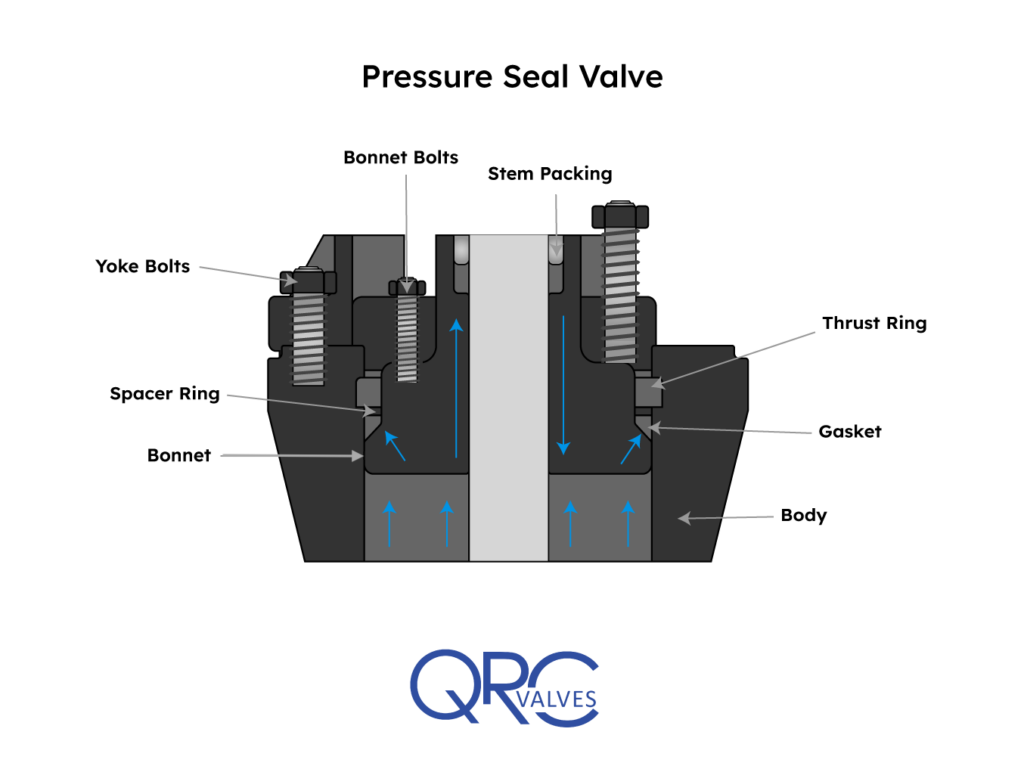 As the line pressure increases, it exerts an upward force on the bonnet. In turn, the bonnet pushes the gasket upwards, which also presses against the spacer and thrust rings. Because the diameter of the thrust ring penetrates into the valve body, it limits the upward movement of the bonnet.

As a result, a further increase in the line pressure makes this joint between the valve body and the thrust ring tighter. This also improves the seal of the valve. Thus, the key feature in this valve type is the presence of the thrust rings. Generally, these rings are segmented and fixed separately, so that they fit into a groove machined in the valve body. Also, when the valve requires some sort of maintenance, rings are removed through the hole via a thin rod.

Note: The Bonnet Bolts only hold the bonnet up until the line pressure is present and then the pressure forces the bonnet up against the gasket (which is held in place by the segment rings), creating a tight seal. The higher the working pressure, the tighter the seal.

The pressure seal bonnet design became predominant in the mid-1900s and has gradually replaced the traditional bolted bonnet design in high-pressure applications. There are several differences between these designs as the following table outlines.

The pressure seal gasket is located just below the thrust and spacer rings in the valve bonnet. It experiences a significant amount of pressure, which is equal to the product of the system pressure and the surface area of the bonnet. Generally, its structure consists of a wider top and a wire-thin toe, with an angle of either 30° or 45° between them. Steel is a common material for the gasket. The gaskets can also be made from various grades of stainless steel and graphite as well.

Metal gaskets are likely to undergo some deformation due to the pressure from the valve hydrotest, resulting in possible leakage. However, the practice of hot-torquing the bonnet bolts after system pressure and temperature equalization helps to overcome this. Another shortcoming of using metal gaskets is its expansion and contraction during thermal-cycling. When this occurs, the gasket can end up getting welded to the valve body, making it difficult to replace during maintenance. If this is the case, it may require the use of mechanical force for removal. After removal, machining of the valve body restores a smooth profile for the replacement gasket.

Because of these challenges, several gasket materials such as brass and aluminum substitute for steel. These have proved unsatisfactory as they could not tolerate the chemistry, temperature, and pressure requirements. However, graphite has proven to be an effective substitute to overcome the shortcomings of a steel gasket. It does not weld to the valve body and its flexible nature makes for easy handling.

No comments to show.